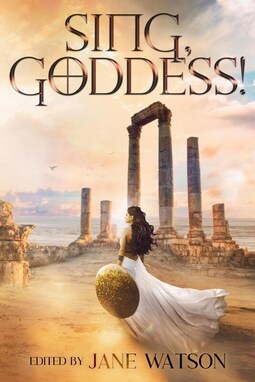 "The Real Prize":  A retelling of the myth of Atalanta and the Golden Apples
August 2021, Sing, Goddess! A YA Anthology of Greek Myth Retellings

About the Story: Atalanta is a princess of the merfolk who would rather be a warrior than royalty.  When her father, the king, tells her it's time to marry, she agrees to a contest, the winner of which will be her groom.  Then she craftily designs a race in which she knows no merman could beat her--in fact, they could die trying.  But the risk doesn't stop three determined young mermen from signing up, one of whom has some clever plans of his own.
​​
About the Anthology: Aphrodite. Zeus. Medusa. Hercules. You’ve heard their names. You thought you knew their stories… until now. Lose yourself in this collection of eleven young adult re-imaginings of Greek myths from the authors of Snowy Wings Publishing. From magical kingdoms under the sea to the halls of a modern high school, from Ancient Greece to the distant future, you will find romance, courage, fantasy, danger, and more. With each story bringing a twist on a classic legend, there is something for everyone to enjoy again and again. Across the ages, the Muses call: SING, GODDESS!